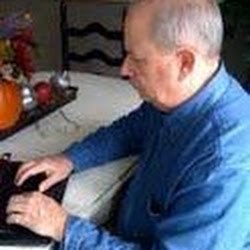 Author John Bushby was introduced to the film noire genre while in grade school. From watching grainy black and white films on an antique Philco television he began to satiate his taste for the genre by reading everything he could find. Dashiell Hamett, Eric Ambler, Le Carre, Len Deighton, Sax Rohmer, Alan Furst, Philip Kerr and David Downing all have shown him the way of the craft.  Bushby has drawn on the experience of over thirty years of global business experience, traveling in and out of Europe and Asia to set the background for his books.

His characters come from the people he has met along the way.  Heroes and villains are drawn from casual and close acquaintances, often a mixture of both.  His prime interest in writing is to ask the question of what would someone do in a situation where life or death might hang in the balance?  The period that fascinates him the most are the years leading up to the Second World War.  Looking back from where we are now it is easy to see all the steps that led up to that catastrophe.  But living then, with the lens of one’s life to observe the world how would a person act?  Just as we today cannot foretell the future or even the next minute, the men and women in the 1930s and 1940s had only their own experience and view of the world to guide them.

In The Warszaw Express Bushby draws on his experience as a pilot and Naval Flight Officer in Vietnam to describe the lure of flying and the feeling of being in combat.  His creation of Harry Braham comes from a distillation of family members caught up in the two world wars.

Bushby lives in Flanders, New Jersey.  He is now working on the next in the Harry Braham series of novels.